Conquering Evil With The Light Of Jesus Christ

John 17:3 (KJV)  3 And this is life eternal, that they might know thee the only true God, and Jesus Christ, whom thou hast sent. 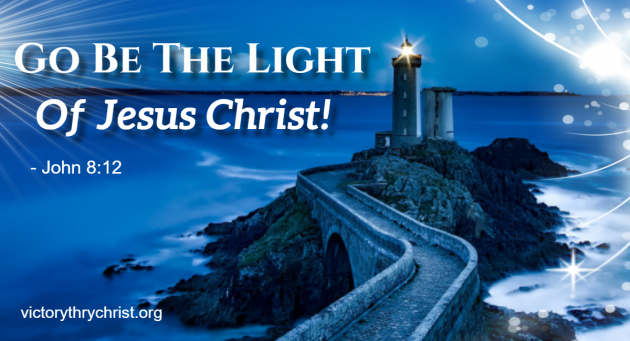 Recently I read an article that said Oprah Winfrey has confused many Christians concerning the Bible and eternal salvation.  I listened to the accompanying video of Oprah discussing the foolishness and folly of Christians believing that eternal salvation can be obtained because of a man on a tree dying for our sins and salvation.

Oprah believes that she has obtained salvation through herself because of her good deeds.  She is free in American to believe whatever she wishes, but new Christians and Christians who don’t follow scripture need to beware.

I’m not going to call Oprah foolish and I’m not going to criticize her.  I’ve never felt name calling accomplishes much and I feel that it won’t do much for my Christian testimony.  My only concern in this article is for the Body of Christ.

Oprah also said that she stopped believing in Christianity when she heard someone preach that we have a jealous God.  She made it very clear that she couldn’t believe in a God that would be jealous of His own people.  She also didn’t investigate further into whether such an absurd statement about God is actually true or just a misinterpretation.  By studying the Word, she could have learned what God was really talking about.  Exodus 34:10-14 clearly states God’s purpose for our centering upon Him only.

The Bible says that those who are not saved cannot understand the things of God, so when we try to analyze or make sense of God’s Word intellectually as Oprah and others who wish to make a good argument against Christianity do, we’re always going to judge God’s Word by worldly beliefs and standards as well as our personal experiences rather than what the scriptures say.  Exodus 34:10-14 sheds much light on God’s love for His people, rather than jealousy.  Click on the verse above to read it.

We can mentally reason anything we want, including reasons to not believe in God if we make it a project to do so.  But if we want to be honest we’ll stop taking what God says in the Bible out of context and study it. It doesn’t require much study to realize that God’s Jealousy is not of His people, but for His people to center upon Him and not other Gods so that His Word will penetrate their lives for great blessings.  He desires to bring us awesome blessings!

By centering upon God we can live Godly lives.  Living by His Word develops core values which never change, and as a result of commitment and consistency, they prosper the lives of those who live them with guidance, blessings, respect, honor and success in a way that doesn’t bring harm to others.

We can’t be Christians and sway from one belief to another because when we do, God isn’t able to bless us. It’s through our belief in the Word where our relationship with God is established by faith. It just makes sense that if we don’t fully believe in God or have faith in the Word, then we can’t have the blessings that belong to us.  We can receive what we don’t believe!

The Darkness Of Doubt

When Christians sway back and forth in our beliefs with this new idea or that we get out of a relationship with God or we prevent ourselves from trusting in Him. God is not jealous of us; God loves us!  He is trying to keep us from following people like Oprah who desire to take the eyes of Christians off of Christ and onto her and her beliefs concerning the information she sells and her political views which helped to vote a person into the American presidential office who stated that America is no longer a Christian nation.

I watched the video of Obama stating the downfall of Christianity to His Muslim beliefs just as a dictator does when they take over a country.  For eight years American Christians became a target of hatred because we desired to follow God rather than the radical beliefs being forced upon us as legal United States citizens about our worth, our core values and our love of only one true God and the Son He sacrificed for the world to receive eternal salvation.

As an American, people like Oprah have a right to speak their beliefs, but Christians beware. When you follow the advice of the world on salvation to follow a person over Christ you will lose your salvation, and this is exactly what they want.  Muslims who wish to overthrow the world to make everyone believe in their religion of Islam look to Christians as a group of people who can be easily swayed.  This is because many Christians don’t read the Bible and therefore, don’t live the Word.

But each of us can continue to grow stronger in the Word daily as we take our place in God’s Kingdom to live the destinies we’ve each been given and to become united in Christ.

Some of my relatives call me sleazy, a liar and crazy because they don’t believe in Jesus Christ or God and I do. There are always going to be people to challenge our faith, but if we wish to be true believers, we need to choose God over being made to feel foolish by persons who mentally describe Who God is and His intentions for mankind.

Every Christian needs to get off the fence of doubting their believe in God through Jesus Christ and make commitment to center upon God above all else.  If they can’t do that, then they’re not Christians. They have no core beliefs and they are easily swayed by self-proclaimed leaders who are looking for sheep to lead astray.

Are you willing to let the world separate you from Jesus Christ Who has redeemed you from sin and spiritual death?  If you’re a Christian then you need to go be the light of Jesus Christ.  Anything less will keep you in darkness.

James 1:22 But be ye doers of the word, and not hearers only, deceiving your own selves.

The only Christians who can be fooled are those who have not taken the time to become a Doer of the Word and Not a Hearer Only!  Without a relationship with God through His Son, Jesus Christ, it’s easy to be swayed with every new doctrine that is presented to them by people who appear important and wise.

Jesus is our light to God’s truth…

John 8:12  Then spake Jesus again unto them, saying, I am the light of the world: he that followeth me shall not walk in darkness, but shall have the light of life.

DON’T LET THE RICH AND FAMOUS SWAY YOUR BELIEF IN JESUS CHRIST!  Jesus is the only path to eternal salvation.  He is the only truth when it comes to infinite and total peace.

If you want peace, then you need to get in line with God’s Word which is our strongest defense against the enemy behind everything that comes against us, which is Satan.  The thief mentioned in John 10:10 is Satan.  Jesus came to give us abundant lives as we live righteous lives through Him (Isaiah 32:17).

Jesus came to bring peace to the world…

John 14:27 Peace I leave with you, my peace I give unto you: not as the world giveth, give I unto you. Let not your heart be troubled, neither let it be afraid.

The thief has many faces.  It can look like anyone who tells you that you’re belief in God is wrong.  That Jesus and the Word is a lie and that the only peace and joy you will ever find is by following a person or a gang of people who are only looking to deceive and destroy.

God Has Kept The Light Of Jesus Christ Shining In America

God has answered the prayers of Christians in America by giving us a President who desires to keep God at the center of our country.  He has re-established Christianity in America.

It became politically correct not to say “God bless you” or Merry Christmas,” for example, in America. But during those times Christians became united in their prayers and turned American back to a God Who is not jealous of His people but Who will bring victory when we are together in spirit, mind, soul and body for Him.

America tolerates all religions, yet Christianity was thrown in the trash for eight years like yesterdays old news, but one man and his cohorts cannot change what God has put into place.  Let us remain united to prevent the freedom of Christianity in American and the world by keeping the light of Jesus Christ shining brightly from our lives, our homes and from our hearts.

Fellow Christian, Go Be The Light Of Jesus Christ!

Exodus 34:14 For thou shalt worship no other god: for the Lord, whose name is Jealous, is a jealous God:

Leave The Light Of Jesus Christ For Home Page

How To Take Back Your Healing

How To Have God Centered Faith