If you're a Christian and haven't noticed that Christians are under attack, you need to read this book! If you have noticed, and you don't know what to do about it, Contemporary Conditions of Hate & Moral Law VS Christians and Holy Scripture is a "MUST READ!" 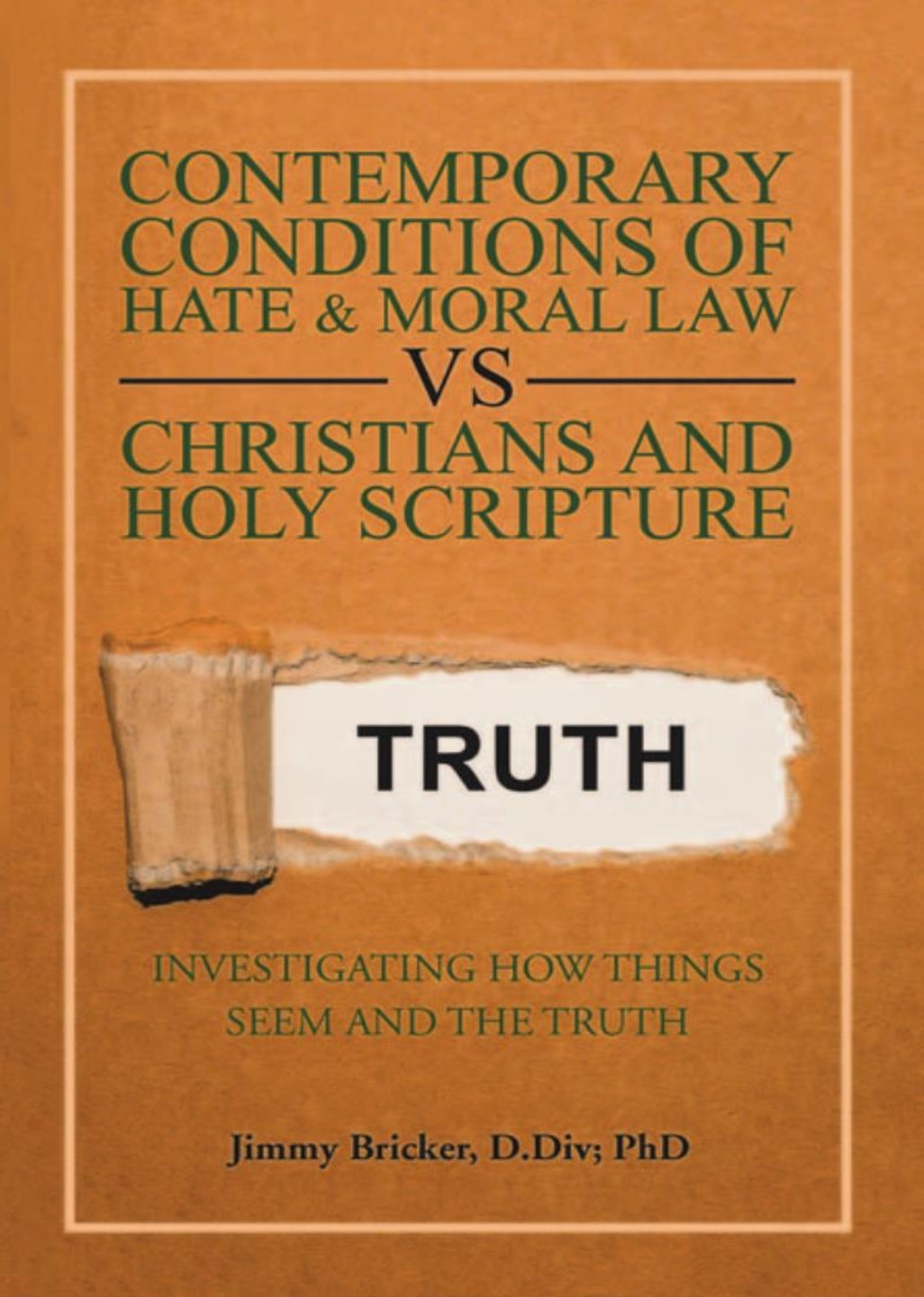 The background for this book lies with the proliferation of attacks on Christianity by a progressive cultural movement. While Christians are asking how to respond, daily there is a bombardment of news that tends to inaccurately use Christianity against Christians.

The many ways in which the Word of God is used to express hate should bring Christians together in a unified voice of pragmatic and truthful rebuttal from the Christian community rather than compliance with the changes of society.  What this means is that Christians should reconcile with the teachings of the Bible and not It to us or socieity.

Purchase In Paperback or e-Book Safe and Secure On The AuthorHouse.com Site.

Highlights Of The Book...

The author discusses the increased use of Biblical passages and commandments in society today to demonstrate hate. Virtually everything that one says today can be twisted into being hate speech at or about something. Coupled with the trend of changing the definition of words to suit the cause leaves Christians confused and unable to know how to react or respond. Contemporary Conditions of Hate & Moral Law VS Christians and Holy Scripture shares these specific problems with Biblical solutions to address them. The following highlights cover the many important issues facing Christians today that you'll find in this dynamic book.

Understand how to recognize the lies and strategies created from taking scripture out of context for personal or political purposes to confuse Christians.

Learn to keep a focused effort to confront the verbal assault on Christianity using moral law and the Word of God. Know how to take action.

Even though discussions on cultural movements and Christianity will continue, this book will help you to stand strong and firm in Christ to live the Word.

Click the following link to write a review:  AuthorHouse.com.

Contemporary Conditions of Hate & Moral Law VS Christians and Holy Scripture by Jimmy Bricker, D.Div; PhD is not the typical Christian book! It's like no other Christian information guide I've ever read!  Bold and honest, it details contemporary U.S. political and social events up to 2019 that are leading society away from the Christian ethic with clearly stated solutions based upon God’s Word.

The book includes information believers can’t find in most churches. For many Christians it will reveal whether their church leadership teaches the true Christian message or if it’s been compromised to satisfy the agenda of a worldly society with watered-down versions of the Bible.  The repetitive listening of a “feel good” message delivered by false prophets proficient in the art of deception puts one's salvation at risk. Therefore, having this information is imperative to understanding one’s true Christian identity. This is a vital time to be ready and prepared to present the uncompromised Word of God against the onslaught of accusations from progressives claiming that the Bible is evil for the sake of their political agendas.

Listening to the news, whether fake or truthful, one can’t hide from the fact that Christianity is under attack!  Believers must learn how to take the offensive against the myriad of lies which claim that the Bible supports abortion, infanticide, open borders and the sanctity of marriage not only between a man and a woman, but also between anything that contradicts scripture, such as men with men and women with women. We must recognize the deception and immediately contradict the lies with relevant scripture.  If we don’t, government becomes empowered to overshadow and destroy the United States Constitution which is based upon Judeo-Christian beliefs.

God’s Word never changes, but the progressive mind arrogantly changes the scriptures into what they want.  Words have been switched as well as eliminated to take on new meanings no matter how depraved or outrageous.  Little by little they have broken down human sensibilities to accept these dangerous changes  and beliefs that are used to eventually change laws rather than obey them. With these false truths invading even our churches, believers can no longer stand on the fence.  It’s time to touch down on one side or the other to either stand up for God’s Word or fall into complacency. However, the problem facing many Christians is not feeling qualified to be on the offensive for God’s Word against those who accuse the Christian and Jewish communities of hypocrisy for making God’s Word a lifestyle rather than following the progressive values that are becoming more and more depraved as greedy politicians push for more control over society. Politically and socially we’re accused of being unjust and evil because following scripture leads us toward Godly endeavors rather than their personal and political agenda.

I was excited reading through Contemporary Conditions of Hate & Moral Law VS Christians and Holy Scriptures because it teaches how to quickly prepare against accusations and anti-Christian statements with relevant scripture needed to counter-attack the specific areas of Christian persecution each individual believer faces within their communities. The author also gives encouragement that we don't have to walk in fear but faith in God knowing that He is protecting us and our endeavors to fight for the Gospel of Jesus Christ by taking the authority we have in Him.  And with the current President of the United States, we see the victory committed effort and prayer brings as he and his administration work endlessly under a deluge of daily attacks to defend our constitution and the freedoms it brings such as the right to worship as we please.

As the author so clearly states, “Passivity will not work when the opposition is relentless. Instead of being on the defensive, churches must put Christianity on the offense.” I can’t agree with him more.  I was saved many years ago at the age of 9 and have never felt the need to defend the truth of God’s Word so strongly as I do now.  I’m very thankful to have this comprehensive book and guide to help strengthen and educate me to better protect the right to be a Christian, even in the face of great opposition.  I admonish all Christians to commit to God’s ways and defend them with all their might! Contemporary Conditions of Hate & Moral Law VS Christians and Holy Scriptures will give you the courage, knowledge and Biblical wisdom to teach acceptance of religious and political differences over hate. 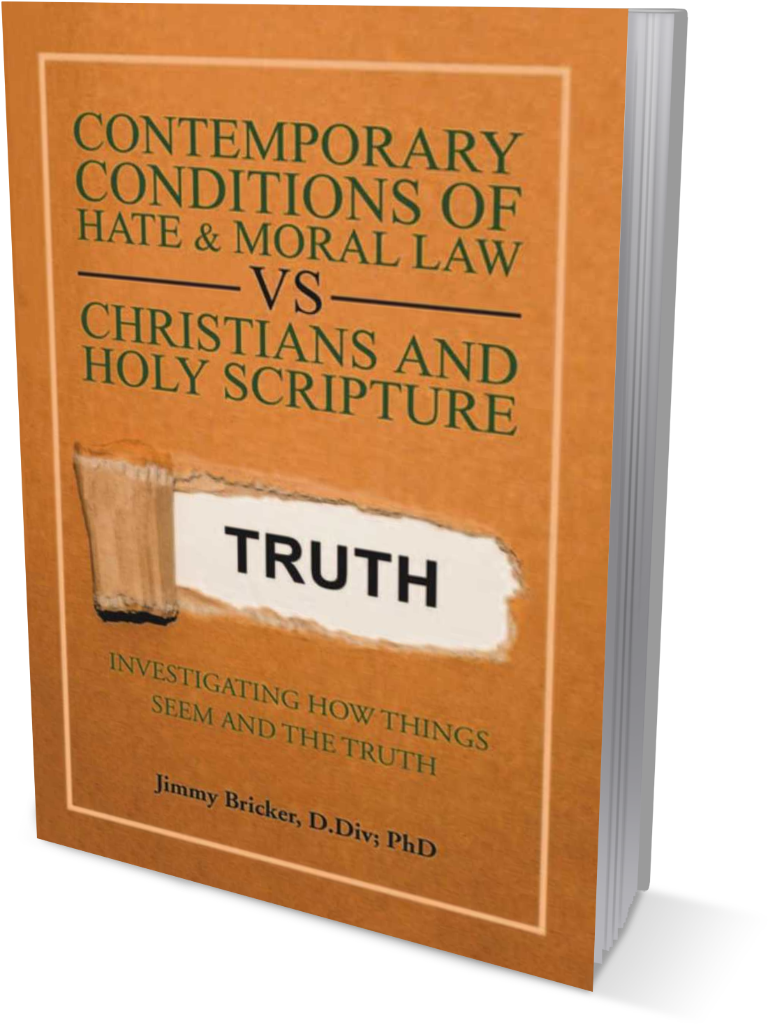 Jimmy Bricker is a retired agriculture educator from Purdue University and current faculty at Cameron University in Oklahoma. He has science degrees from the University of Tennessee and Cornell University. He is a two tour disabled Vietnam veteran that continues to be motivated by his wife of 49 years to keep learning new things instead of going stupid.

The new challenge has been PhD work at Luder-Wycliffe seminary and thus this book. Though he prefers the tranquility of cows, dogs and open land, he believes you're not a good a good steward when you have something to say and never say it. He wishes most to be an inspiration and a good example to his students to embrace life-long learning and good ethics.

Click the following link to write a review:  AuthorHouse.com.

This is the bottom slider area. You can edit this text and also insert any element here. This is a good place if you want to put an opt-in form or a scarcity countdown.