THE GRACE OF FORGIVENESS By Rick Bailey

An Understanding Of Biblical Forgiveness 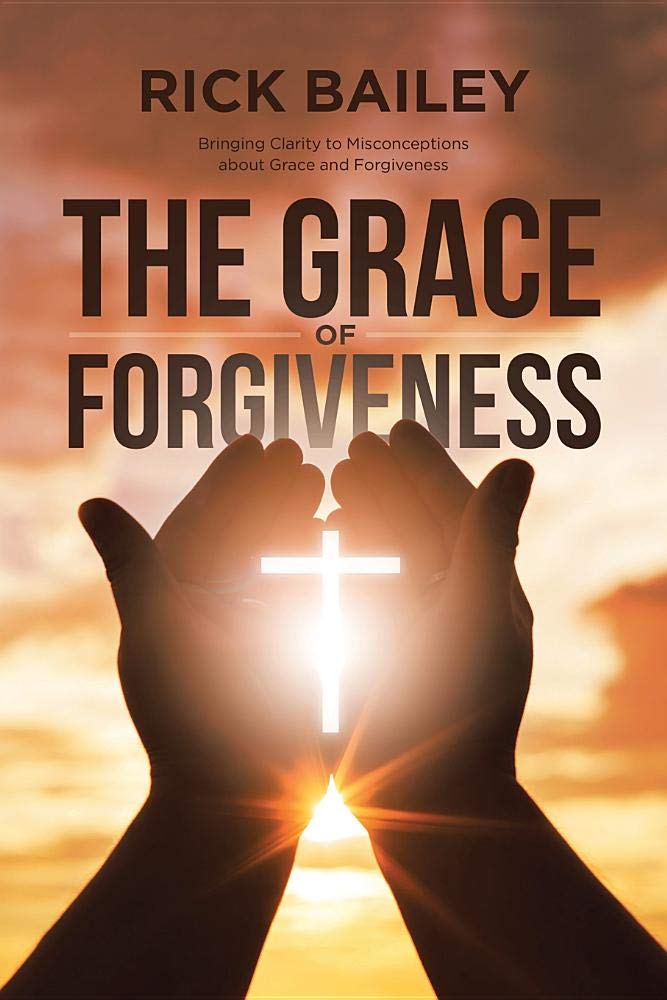 About The Grace Of Forgiveness

While grace and forgiveness have been extensively written about in the Christian community, too often both have been misunderstood and misapplied. Much confusion, fear, and spiritual bondage has resulted from believing mistruths that have been taught on these subjects. Learn how The Grace Of Forgiveness will give you a better understanding of both.

Get the benefit of the author’s many years of teaching, study and personal experience that will clearly address some important misconceptions.

The author shares many of the biblical truths of grace that has set multitudes free.

He shows that grace is a hundred percent the work of God on our behalf and has nothing to do with our response or our behavior.

You’ll learn that forgiveness is a gift eternally applied to our lives, based upon the finished work of Christ, not in any way based upon what we do or what we don’t do.

Walk in the freedom of what it means to be in Christ by renewing your mind to the truths of grace and New covenant theology.

Live The Peace Of Christ

No more struggling to “keep the law” or to be right with God by works rather than living a grace-based life in Christ Jesus.

Understand the gospel of amazing grace, the good news of love and acceptance where you will never be condemned.

Information About 'The Grace Of Forgiveness'

Purchase At Amazon.com and Barnes and Noble.

Review  Of The Grace Of Forgiveness
By Margaret Lukasik

If you’re tired of living in bondage to sin, The Grace Of Forgiveness will set you free! Written by Rick Bailey, it’s message can help the many Christians who have been negatively touched in some way by Christian teachings that give present-day relevance to the Jewish laws of the Old Testament. The mixing of Old and New Testament teaching had obscured my reality of Christ’s work on the cross for many years. It took much study and application to undo the many false teachings I had learned. It would have been a great blessing to have had The Grace Of Forgiveness years earlier!

All believers are free to be at peace in Christ with the confidence of forgiveness by grace rather than living with sin-consciousness and guilt. Rick’s writing is clear and concise on the subject with scripture to prove His message. He begins by breaking down the two covenants described in scripture which are the Mosaic Covenant from the Old Testament and the New Covenant from the New Testament to show the differences between the two. Without knowing the difference, it’s easy to slip into following many of the Old Testament laws which lead to “self” or “dead works” to be righteous rather than looking to Jesus to be righteous through Him.

Living in Christ should lead to a blessed life, but when Christians work hard every day to do what only Christ could do and what He has already accomplished on the cross, they become mentally exhausted rather than spiritually strong and refreshed. Rick Bailey leads his readers into the success and victory only the New Covenant can bring. He lays it all out for believers to live freely knowing that their sins are forgiven by God’s grace in Christ. The book fills the heart with joy and thankfulness!

The Grace Of Forgiveness is beautifully written to give meaning to Christ’s resurrection and to help Christians understand their identity in Him. Although the subject can be difficult to understand for those bound in the rituals and legalism of the Old Testament, the book’s message leaves no doubt that believers are to follow the New Covenant today. For those who already understand the subject, the book can be used as a guide for teaching youths, teenagers and adults. One can never learn too soon that they are free of sin and forgiven by God’s grace. I recommend that all Christians get The Grace Of Forgiveness to live the fullness of their salvation!

Rick Bailey is a native of Colorado, born and raised in Denver, and now lives in Colorado Springs. He lives with his wife Ruth. Between them, they have five children and ten grandchildren. He was raised in a Christian home, saved as a child, and felt the call of God at the age of seventeen to learn and study the Scriptures. He has been a lifelong theologian and student of the Bible. Over the years, he has taught numerous home and church Bible studies and is a proponent of the New Covenant grace message. He has been to three Bible colleges and graduated in 1974 from Oral Roberts University with a bachelor’s degree in psychology and biblical education. He went on then to receive a master’s of education degree from Georgia State University and the Christian-based Psychological Studies Institute in both Christian counseling and biblical studies.

As a biblical counselor and teacher, his passion is to communicate the truth of God’s grace to the body of Christ, to educate them in biblical theology, to equip them for ministry, and to encourage them to develop a New Covenant mind-set. Having been raised in a religious home where “legalism” (i.e., strict adherence to laws, rules, traditions and performance-based living) was more its focus than Spirit led living, his life has been a journey of discovering the true gospel of grace – the gospel that sets you free from fear, guilt and the manipulation of the “mixed law and grace” teachings of Christian leaders.

You can reach the author through e-mail at newcovenantgrace4you@yahoo.com.