The Bible Tells Us How
To Regard God and Country

What Do The Scriptures Say?

Psalm 33:12 12 “Blessed is the nation whose God is the Lord, the people He choose for His inheritance.”

Isaiah 60:12  “For the nation and kingdom that will not serve you shall perish; those nations shall be utterly laid waste.” 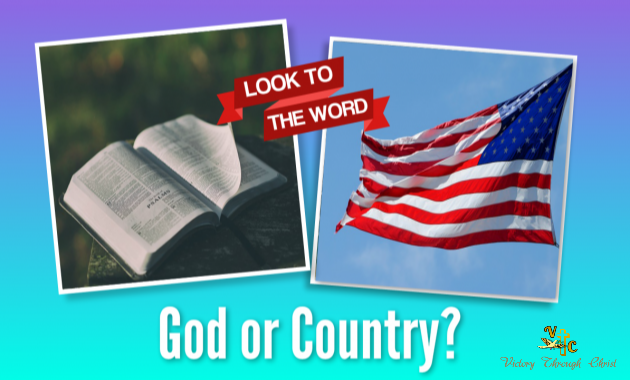 NOTE:  hover over all scripture references to read.

Psalms and Isaiah make it clear that all countries that do not serve the Lord will perish.  So what do Christians do when they live in a country that doesn’t follow God and His Word, the Bible?

Jesus told his disciples that all authority in heaven and on earth was given to Him. This means that what He has to say about God and country is the last word or instructions on the subject.  So we need to look into what Jesus has commanded us to do in our daily lives.  Matthew 28:18-19

This means that we can look to Jesus to help us not only satisfy both God and country, but to help us respect authority when it’s difficult and to ask God for help when the laws of the land are oppressive.

The problem for many Christians, especially in oppressed countries, is how to balance their Christian commitment with their allegiance to their countries.  Two important questions to consider have to do with personal beliefs and one’s place in society.

For instance, will God protect those who defy the law when it goes against their Christian or personal beliefs?  Or how does God regard Christians who put worldly political or business standards before Christian ethics for financial gain or social acceptance?

Somehow these questions have to be reconciled because of a Christian’s duel citizenship to God and country. When we’re born in a country we become a citizen of that country if that’s where our parents were born.

There are other countries, like America, where all it takes for citizenship is to be born in that country.  However, when we become reborn, we also become a new nationality in Christ, meaning that we’re citizens of heaven. Philippians 3:20 and 1 Peter 2:9.

Paul teaches how we can honor God and country at the same time.  He makes it clear that God is the author and creator of all authority. Let’s look at verse 1.  All verses are taken from the International Standard Version.

1. Every person must be subject to the governing authorities, for no authority exists except by God’s permission.  The existing authorities have been established by God,

Paul tells us in verse 1 that all persons must be subject to the governing authorities which exist only by God’s permission. He’s talking to all persons, including Christians.

At present there is much dissension in America because of a lack of acceptance of our new President, Donald Trump. Much violence continues as He continues to work with God on behalf of our Nation. If our country would follow Romans 13:1-7, peace would replace the anger, violence and complaining.

2. so that whoever resists the authorities opposes what God has established, and those who resist will bring judgment on themselves.

3 For the authorities are not a terror to good conduct, but to bad. Would you like to live without being afraid of the authorities? Then do what is right, and you will receive their approval.

Verses 2 and 3 explain how to insure that you don’t have to fear the law. It says to follow it.  If you don’t, then you’ll fear it.  If you go against the law, then you’ll be afraid every time you see the police, for example.

If you follow the law, then you’ll have nothing to fear.  Not following a countries laws will bring judgement on any person.

We need to hold our thinking to a high standard regarding our country’s leaders. Bad or good, we need to see them as chosen by God and even if they don’t realize it, they are under God’s authority.  The positions they hold were created and authorized by God.

Rather than be disrespectful, complaining and unlawful, we must give honor to the offices held, even when we don’t like or respect the person filling it!

When we respect the law we’re actually giving respect to God. This frees us from the burden of punishment that is the result of lawlessness as we see in verses 4 and 5.  And we can also maintain a good conscience.

6. This is also why you pay taxes. For rulers are God’s servants faithfully devoting themselves to their work. 7. Pay everyone whatever you owe them—taxes to whom taxes are due, tolls to whom tolls are due, fear to whom fear is due, honor to whom honor is due.

Taxes, are a good example of following the law.  Many people feel that their taxes are too high.  When they disrespect their government, they may feel justified to cheat on their taxes.

But verses 6 and 7 make it clear that everyone is expected to pay what they owe to government, no matter what is due, including honor, even when you don’t believe in the persons of authority over you as I’ve said.

By understanding that God is above all authority, we can see as Christians how important it is to follow the laws of our countries.  Doing so brings blessings to us rather than negative circumstances, but it also opens the door for Christians to rise above evil strongholds that have overcome governments that are unjust.  Acts 10:35.

If we do what’s right, we’re acceptable to God and have the right through Jesus Christ to assist God when it comes to government through prayer.

Blessed Even In Oppressed Countries

Paul made it clear that we’re to respect the laws of our countries without exception because God established them.  So what do we do when we live in a corrupt society where the leaders best interest is not God, the country or the inhabitants of the country?

As Christians and citizens we have have two powerful means of lawful change. Prayer and voting.  If your country doesn’t give it’s citizens the right to vote, you still have the most powerful means for change, which is prayer!

Because of evil in the world, some leaders are self-motivated. But they’re not above God or the position they hold created by God.  Therefore, Christians can overcome what is evil through prayer in Christ Jesus. Intercede for your country and it’s people by the authority of Jesus Christ and because all world positions of authority were and are established by God!

John 3:16 (ESV) “For God so loved the world, that he gave his only Son, that whoever believes in him should not perish but have eternal life.

Leave God and Country For Home  |   Prayer Of Agreement

Warning! Not Knowing How Christians Should Forgive…

Do You Have Christian Focus?