Many of our brave police officers are currently under attack in some states and treated with less respect than criminals.  This is one of the reasons I’m thankful that A. L. Mingo just published his new book, Searched and Seized By God.

It’s a true story of great courage to overcome the barriers of bias that were trying to keep Mingo from realizing his dream.  Now with extreme bias formed against many of our brave and courageous officers in specific U. S. communities, this book provides the answers to overcome and persevere! 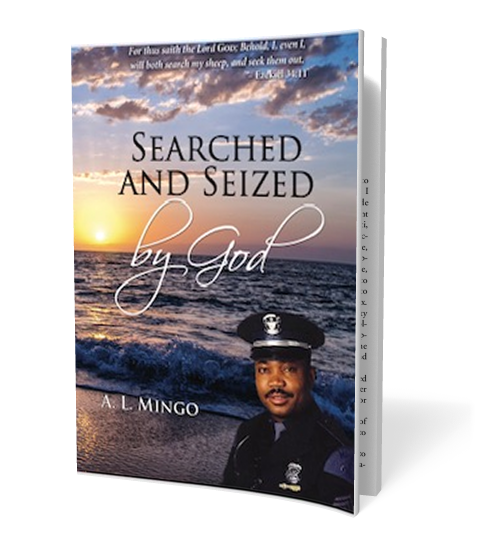 A Story Of Great Courage, Enduring Love and Family

While our officers aren’t facing the difficulty of racism as Mingo did as the first black police office in his city, they can learn from his determination to find his dream and even surpass it with awards and promotions that allowed him to retire as a city police chief.

While he never noticed racism as a child and youth, when it did strike against him, he overcame it not with anger, resentment or attitude, but with a heart of cooperation and commitment to become the best police officer he could.  He felt the pain and strain of knowing that he had to work harder than other officers, but he wasn’t going to let the color of his skin be the factor for not achieving his dream.

He persevered, even to the detriment of his life, but once he became a Christian police officer, his resolve and dedication were fueled by such strong faith that he would achieve his goals — and, as his future played out, he did it with honors. Never forsaking God, he was able to overcome financial problems, achieve a loving marriage and enjoy family and service to God and community.

Young police officers today and those who feel the power of their position in jeopardy can learn much from A. L. Mingo’s courage and determination to allow God to work in his life and career to achieve what many times seemed to be impossible.

Read my book Review about this brave and loving retired Christian police officer and retired city police chief who continues today with the same courage and commitment he gave in service to his community to his precious wife who suffers from a debilitating illness.

A Quick View Of Searched and Seized By God