Convicted by Tim Hughes is an exciting Christian fiction adventure thriller that is an exceptional read.  The Christian message of God's love is beautifully entertwined within his writing, giving the story great depth without interferring with the adventure and thrill of the plot.

Facts About The Book 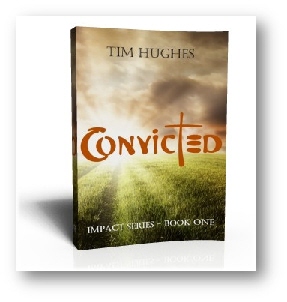 Although Convicted by Tim Hughes is an adventure thriller, it's also a story about the progression of a man's faith in God and his personal growth as He looks to God for His safety and His life.

The main character, Declan Elliot is a young man trying to survive in the decaying and corrupt city of Atlanta, Georgia in the year 2025. As the story unfolds, this lonely man becomes victim to a crime committed against him only to realize his victimizer has now become "his victim" in the minds of many.  With this frightening turn of events threatening to destroy his life, Declan does the only thing he knows how to do when approached by danger, he runs!  Only this time, with his life on the line, he sees no other alternative than to keep running. Where to, he has no idea, but as he puts his trust in God, he is able to avoid the corrupt system that is relentlessly pursuing him.

He meets with new challenges for staying alive as he continues his journey.  Then a most unlikely call opens the door to a past romance that brings him hope for survival and perhaps a new future until another unexpected event turns his life around. Declan looks to God for guidance, but with little faith he lacks a complete assurance that God will see him through his ordeal.  However, it is this element of faith that creates a thread of miracles in his own life and in the life of someone most unlikely to have been influenced by Declan's love of God.

I love reading a great thriller and was never disappointed by Tim's story.  I was amazed and astounded that this is Tim's first novel.  His writing skills are way beyond his experience as a writer.  His ability to put together a great story that entertains while indirectly sharing the message of Christian love and charity leads me to only one conclusion:  this man is not only a very talented writer with a great imagination, but he is profoundly guided by God in his life and his writing!

Whether you enjoy a great thriller novel like I do or not, I highly recommend that you  read Convicted by Tim Hughes. It's got everything that makes a great story with the bonus of the Christian ethic which clearly shows how to live the scriptures in an everyday situation and in times of danger when one's back is up against a wall and there is no where else to turn.

Convicted by Tim Hughes is now available to purchase in the Kindle edition for your reading convenience.  So you can begin reading this exciting story right now!  See below.

Because "Convicted" is ready to order, you can now find out how Declan Elliot is going to respond to the trial before him that can literally take his life.


However, once he realized that something was missing in his life, he and his wife prayed for God's plan to be manifested in his life rather than being content with his own path.  Tim received the guidance he had prayed to receive and was greatly surprised with what he heard.  He learned that God put a call on his life to write books, specifically fiction books with creative plots and interesting characters.

After he was sure that what he had heard from the Lord was indeed what God wanted, he asked for direction and received the path he should take.  Not having writing experience, he realized that he had much to learn, but Tim was determined to move forward with God's will as well as learn to trust God completely.  He wanted to look to God all the way on this exciting journey.  Tim makes the statement that with all things in life, relying on Him is the only way we can truly be on target with our undertaking.  How true this is for all Christians.

As Tim reflects upon his progress he is utterly amazed at God's grace and patience as he guides him forward.

Because "Convicted" is ready to order, you can now find out how Declan Elliot is going to respond to the trial before him that can literally take his life.


Leave Convicted By Tim Hughes For Home Page
Convicted by Tim Hughes review and all associated materials and related studies are the complete work of the site's author, Margaret Lukasik, and cannot be copied by any means without her express written permission.

Convicted is currently not available.